We’re up to Plate 6 in William Hogarth’s A Rake’s Progress – Scene in a Gaming House. Tom Rakewell, briefly flush with blunt after marrying for it in last week’s plate, is once again in the throes of his bad decisions. You know things are bad when you lose your hair. 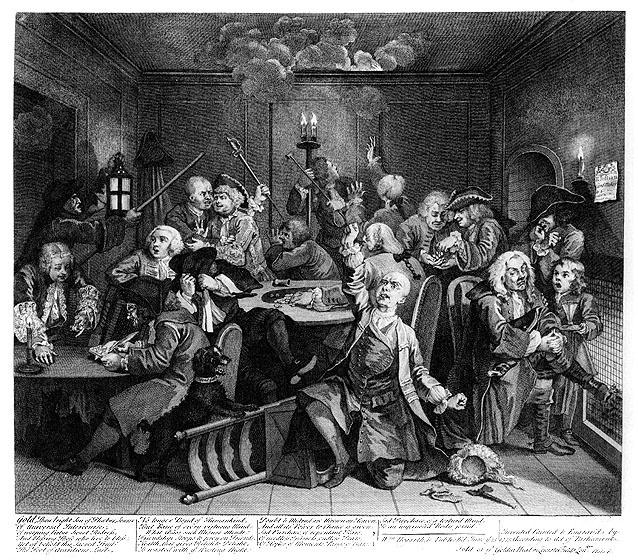 The sixth painting shows Tom pleading for the assistance of the Almighty in a gambling den at White’s club in Soho after losing his reacquired wealth. Neither he nor the other obsessive gamblers seem to have noticed a fire that is breaking out behind them. 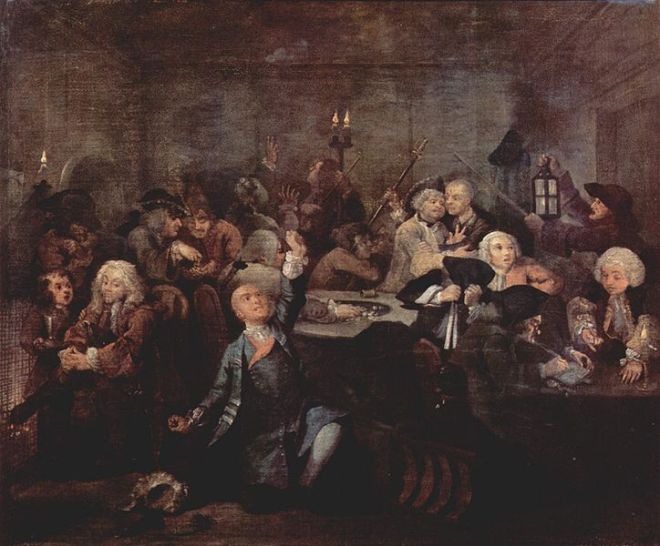 I think so much more detail can be seen in the engraving versus the oil portrait: I didn’t even notice that something was on fire in the background of the latter. Another observation for the Regency romance author is that this scene presents a sneak peek into a gambling room at White’s. An awful lot of men were crammed into that small space (possibly scenting blood in the water as Tom lost his fortune), and the decorations were spare (possibly an omission of the artist, but why decorate what men would likely not care to admire?). 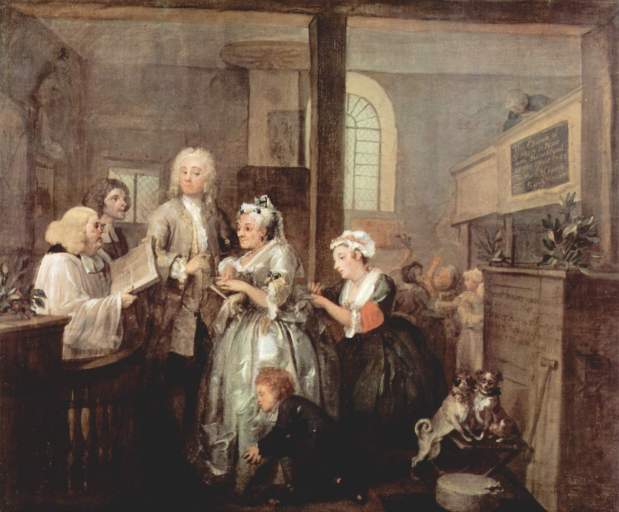 This week we discover Tom Rakewell giving rise to a historical romance novel trope: the profligate in need of a wife with blunt. In other words, beggars cannot be choosers. Hence the title of Plate 5 of A Rake’s Progress by William Hogarth – Married to an Old Maid. Our hero/antihero/idiot needs money yesterday.

Indigent man seeking to enrich himself by marrying a woman of fortune.

In the fifth, Tom attempts to salvage his fortune by marrying a rich but aged and ugly old maid at St Marylebone. In the background, Sarah arrives, holding their child while her indignant mother struggles with a guest. It looks as though Tom’s eyes are already upon the pretty maid to his new wife’s left during the nuptials. 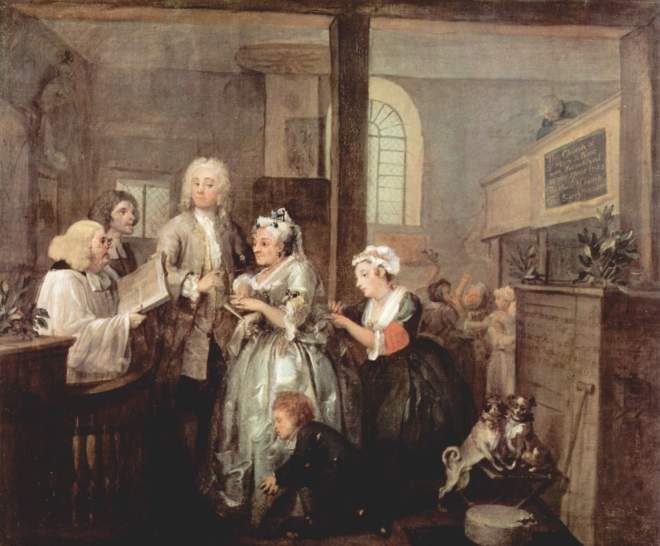 Slang term is taken from the 1811 Dictionary of the Vulgar Tongue.

I felt the need to begin a series of posts illustrating William Hogarth’s series of eight paintings from 1732-34 (and published en masse in 1735) known as A Rake’s Progress. The paintings reveal the rise, decline, and demise of Tom Rakewell, the son and heir of a wealthy merchant who inherits, comes to London, lives out the parable of the Prodigal Son, and eventually takes an involuntary tour of the Fleet Prison and Bedlam. The paintings are in the collection of Sir John Soane’s Museum, London, and considered part of the public domain.

He is a young chub, or a mere chub; i.e. a foolish fellow, easily imposed on: an illusion to a fish of that name, easily taken.

Plate No. 1, A Rake’s Progress, The Young Heir Takes Possession of the Miser’s Effects. From the Wikipedia description:

In the first painting, Tom has come into his fortune on the death of his miserly father. While the servants mourn, he is measured for new clothes. Although he has had a common-law marriage with her, he now rejects the hand of his pregnant fiancée, Sarah Young, whom he had promised to marry (she holds his ring and her mother holds his love letters). He pays her off, but she still loves him, as becomes clear in the fourth painting. Evidence of the father’s miserliness abound: his portrait above the fireplace shows him counting money; symbols of hospitality (a jack and spit) have been locked up at upper right; the coat of arms shows three clamped vises with the motto “Beware”; a half-starved cat reveals the father kept little food in the house, while lack of ashes in the fireplace demonstrates that he rarely spent money on wood to heat his home. The engraving at the right shows the father went so far as to resole his shoes with a piece of leather cut from a Bible cover.

I thought it was interesting that the colorized version was reversed, I’m assuming due to the printing/copying process. Based on the description of this first plate, it’s about to get all biblical up in here for Tom. 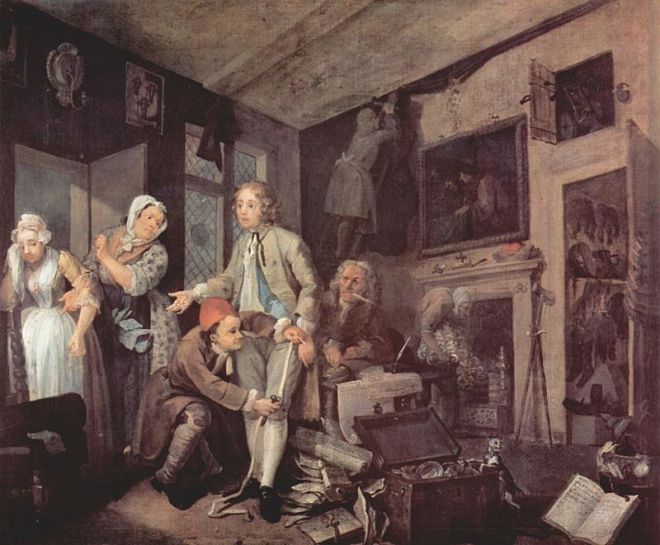 We look before and after,
And pine for what is not;
Our sincerest laughter
With some pain is fraught;
Our sweetest songs are those
that tell of saddest thought.
~  Percy Bysshe Shelley,
To a Skylark