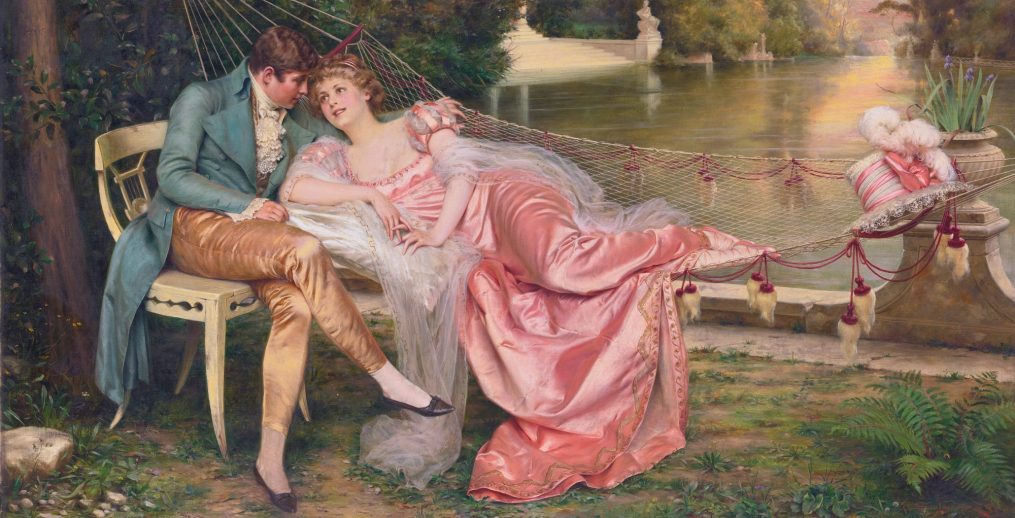 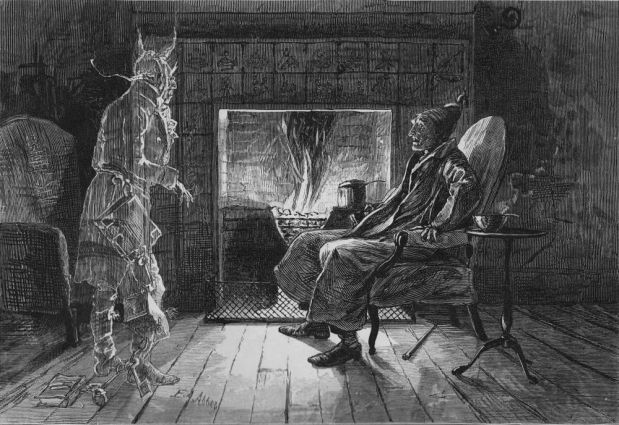 Well, here’s a new one for me: telling scary stories used to be a Christmas tradition.

Now, I know we’re all familiar with A Christmas Carol, by Charles Dickens, and published in novel form in 1843. But am I the only one who didn’t know that there’s a strong folk history of the telling of eerie tales on Christmas Eve? As if the idea of a total stranger coming down your chimney to leave presents and eat your food wasn’t odd enough, I know, but it was also custom, once upon a time, to gather the kinfolk and give each other gooseflesh by sharing creepy stories. 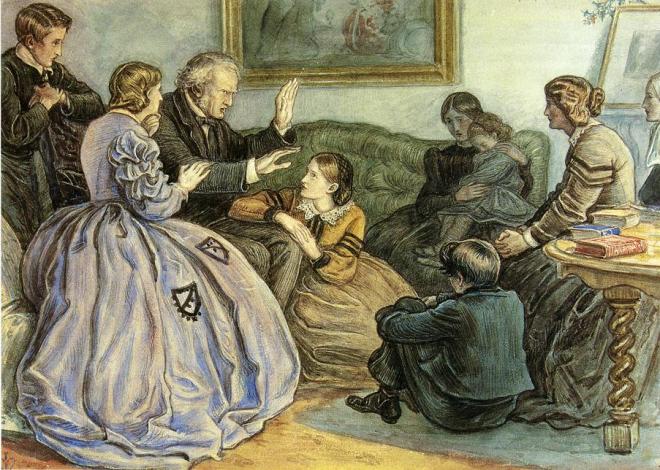 The author of a story or report: I’ll tell you my tale, and my talesman. Tale bearers; mischief makers, incendiaries in families.

As far back as 1633, Christopher Marlowe published a tale of the cold-weather practices of telling stories to captive audiences as they likely huddled indoors to escape the harsh conditions out of doors. His title character, Barabas, recalled:

Now I remember those old women’s words,
Who in my wealth would tell me winter’s tales,
And speak of spirits and ghosts that glide by night
About the place where treasure hath been hid:
And now methinks that I am one of those;
For, whilst I live, here lives my soul’s sole hope,
And, when I die, here shall my spirit walk.
The Jew of Malta, Act 2 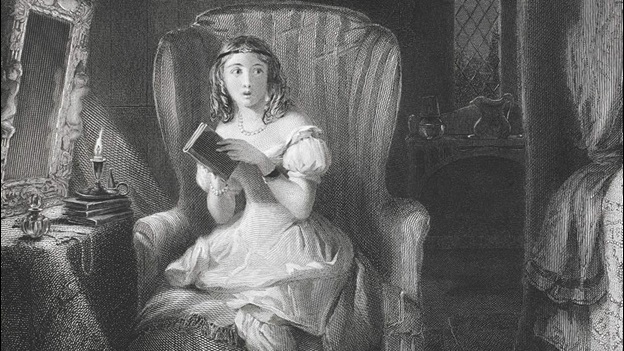 Yet even before that – or was it after? I’ll leave that for true scholars to debate…William Shakespeare, in The Winter’s Tale, wrote of bugaboes and hoodoos, and things that go bump on a cold, winter’s night.

HERMIONE
What wisdom stirs amongst you? Come, sir, now
I am for you again: pray you, sit by us,
And tell ‘s a tale.

MAMILLIUS
Merry or sad shall’t be?

HERMIONE
As merry as you will.

MAMILLIUS
A sad tale’s best for winter: I have one
Of sprites and goblins.

HERMIONE
Let’s have that, good sir.
Come on, sit down: come on, and do your best
To fright me with your sprites; you’re powerful at it.

MAMILLIUS
There was a man–

HERMIONE
Nay, come, sit down; then on.

MAMILLIUS
Dwelt by a churchyard: I will tell it softly;
Yond crickets shall not hear it.

HERMIONE
Come on, then,
And give’t me in mine ear.
Winter’s Tale, Act 2, Scene 1 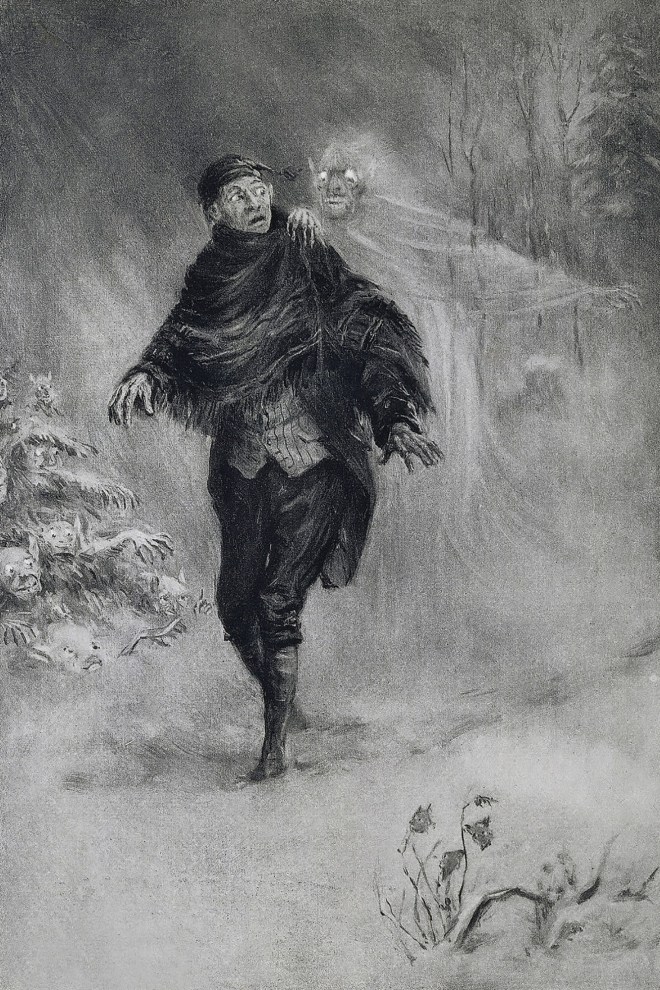 These stories didn’t have to be ghost stories. In point of fact, they’re documented as winter stories – hence the title of Shakespeare’s play. They could involve all manner of apparition, spirit, tingly-feelings, weird occurrences, unexplained situations, and old wives tales. Many became cautionary stories to warn both children and adults alike, and across all educational and class spectra. Washington Irving, while visiting England at Christmas, recounted in his 1819 Sketchbook of Geoffrey Crayon, Gent.:

When I returned to the drawing-room I found the company seated round the fire listening to the parson, who was deeply ensconced in a high-backed oaken chair, the work of some cunning artificer of yore, which had been brought from the library for his particular accommodation. From this venerable piece of furniture, with which his shadowy figure and dark weazen face so admirably accorded, he was dealing out strange accounts of the popular superstitions and legends of the surrounding country, with which he had become acquainted in the course of his antiquarian researches. I am half inclined to think that the old gentleman was himself somewhat tinctured with superstition, as men are very apt to be who live a recluse and studious life in a sequestered part of the country and pore over black-letter tracts, so often filled with the marvelous and supernatural. He gave us several anecdotes of the fancies of the neighboring peasantry concerning the effigy of the crusader which lay on the tomb by the church altar. As it was the only monument of the kind in that part of the country, it had always been regarded with feelings of superstition by the good wives of the village. It was said to get up from the tomb and walk the rounds of the churchyard in stormy nights, particularly when it thundered; and one old woman, whose cottage bordered on the churchyard, had seen it through the windows of the church, when the moon shone, slowly pacing up and down the aisles. It was the belief that some wrong had been left unredressed by the deceased, or some treasure hidden, which kept the spirit in a state of trouble and restlessness. Some talked of gold and jewels buried in the tomb, over which the spectre kept watch; and there was a story current of a sexton in old times who endeavored to break his way to the coffin at night, but just as he reached it received a violent blow from the marble hand of the effigy, which stretched him senseless on the pavement. These tales were often laughed at by some of the sturdier among the rustics, yet when night came on there were many of the stoutest unbelievers that were shy of venturing alone in the footpath that led across the churchyard. 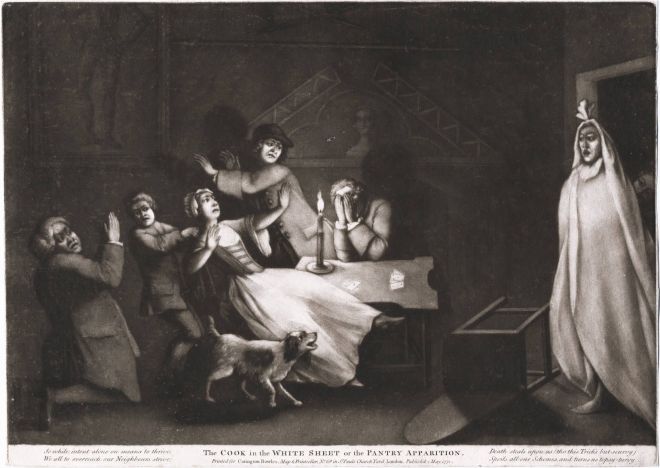 The Cook in the White Sheet or the Pantry Apparition, published by Robert Sayer, 1775, British Museum.

Suffice to say, these winter tales were extremely common, and it’s no wonder they made their Christmas Eve appearances – all were gathered together, likely in want at some point of some form of indoor entertainment.

Perhaps today we live out our horror tales rather than recounting them.