I am so pleased and honored to welcome back author Jude Knight this weekend. She has three new releases in just about as many weeks (House of Thorns released on 26 October, and Abbie’s Wish in Christmas Babies on Main Street released two days ago on 1 November) and I have the pleasure of featuring release number three today: the novella Paradise Regained. Best of all, this little gem is tucked inside a Bluestocking Belles Holiday Collection, so Merry Christmas to all!

Here’s a bit of background about the collection’s connective theme, and a sneak peek into Jude’s story.

The Magic of the Ring

Magic rings are at least as old as literature, and probably as old as rings themselves. There’s something in a solid circle – no beginning and no end – that calls to the story teller in us, by the time stories began to be recorded, these stories had coalesced in tales of rings that made the wearer invisible, rings that summoned powerful spirits or armies or teams of magical workers, rings that conferred the ability to travel great distances in a flash, or speak with animals, or increase wealth, or protect the bearer from harm.

Rings have also long been associated with love, or at least with marriage. The ancient Egyptians saw the circle as symbolizing the promise of eternal love between a man and a woman. Imagery from ancient artifacts shows rings worn on what we now think of as the ring finger. The Egyptians believed a special vein from this finger connected directly with the heart.

The connection between rings and marriage continued through the ages. A Roman groom would put an iron ring on the finger of his bride, symbolizing that she now belonged to him. In the Middle East centuries ago, a husband would give his wife a puzzle ring – several rings that connected together in a complex fashion to make a single band. The idea was that if the wife took the ring off, she’d have trouble putting it back together again, and the husband would know she had been unfaithful (or at least scrubbing the vegetables).

The gimmel ring was a more benign form of puzzle ring – two pieces, worn by a medieval swain and his intended bride. At the wedding, the two halves would be put together for the bride to wear.

In Renaissance times, the poesy rings came into being – gold bands inscribed with a message of love and commitment. My own was such a ring. The message has worn away with nearly 50 years of wear, but it is still inscribed in my heart: Yesterday, today, forever.

And you can’t get more magic than that.

Follow Your Star Home, the Bluestocking Belles’ latest holiday box set, features a Viking ring, forged for lovers way back in the 9th century. In each of the eight stories in the box set, lovers are separated by space, misunderstandings, and the machinations of others. And in each, one of them has the ring. Is it magic? Does it have the power to bring lovers together? Read it and see.

Kopet Dag Mountains, 1794
In discovering the mysteries of the East, James has built a new life.
Will unveiling the secrets in his wife’s heart destroy it? 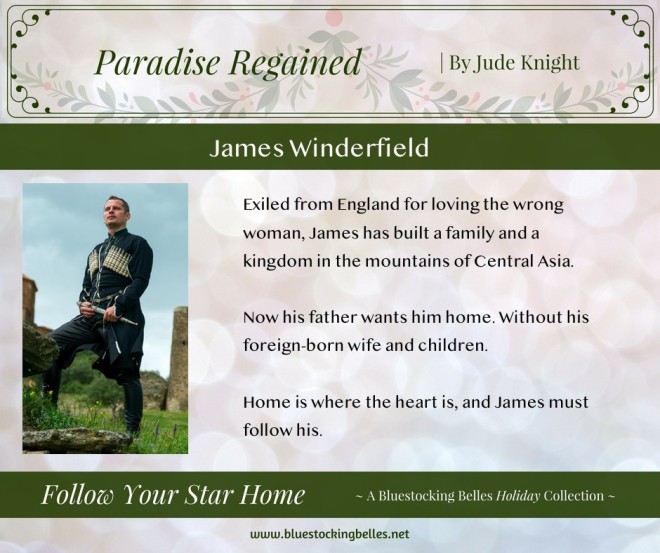 James Winderfield yearns to end a long journey in the arms of his loving family. But his father’s agents offer the exiled prodigal forgiveness and a place in Society — if he abandons his foreign-born wife and children to return to England.

With her husband away, Mahzad faces revolt, invasion and betrayal in the mountain kingdom they built together. A queen without her king, she will not allow their dream and their family to be destroyed.

But the greatest threats to their marriage and their lives together is the widening distance between them. To win Paradise, they must face the truths in their hearts.

“We are going home,” Yousef explained to Cecily, who had joined them for dinner at their fire, bringing her chief guard with her. James was happy to let him carry the burden of the conversation, while James brooded about the distance that still separated him from his family.

Yousef was also yearning for the valley. “We left in the spring, and it is now winter. It will be good to be at our own hearths again.”

“Home,” she said, with a sigh. She looked down at the signet ring she wore on the middle finger of her left hand, a man’s ring surely, and an old one too, gold and crowned in a star. “A star to lead you home.” Looking up, she met James’s eyes. “The promise of the ring. It is from Viking times, or so they say, and is meant to be good luck for travelers.” More quietly, she added, “I, too, have been away from home for a long time.”

“What adventures bring you here, Cecily?” James asked. He had been burning with curiosity all afternoon. Had McInnes left her with enough wealth to travel? He would not have thought so, though she may have had other wealthy relatives to endow her in twenty years.

She chuckled, the wistful expression on her face disappearing as if it had never existed. “Too long a tale for such an evening, Lord James. We would be here all night, you and Yousef asleep from boredom, long before I was done.”

As she had all evening, she ignored Peter and her own guard, a Turk from Istanbul called Kamal. The Turkmen habit of regarding all men as equal, and of treating servants as family, was much more to James’s taste, but she could not help her upbringing. He would try not to hold it against her.

“Suffice it to say,” she continued, “that I left home to broaden my horizons, and I am now ready to return to England.” She turned to Yousef, leaning slightly toward him, and James was amused to realize she was trying to make him jealous. “I love the East, Yousef, but I miss my own land. I miss the green hills and the trees and flowers of home. I even miss the rain.”

“Have you been to Persia, Cecily?” Yousef asked. “You would love the gardens of Persia.”

“Persia, Lebanon, Turkey, Egypt.” Cecily sighed. “They all have their beauties. None of them are home.”

“I burst my breast, striving to give vent to sighs, and to express the pangs of my yearning for my home. He who abides far away from his home is ever longing for the day he shall return.”

Paradise Regained is a novella in Follow Your Star Home, currently on prerelease and to be published on 4 November. Get your copy today!

For information about the other novellas in Follow Your Star Home, please see the Bluestocking Belles’ website.

Jude Knight wants to transport you to another time, another place, to enjoy adventure and romance, thrill to trials and challenges, uncover secrets and solve mysteries, and delight in a happy ending.

She writes everything from Hallmark to Regency Noir, in different eras and diverse places, short, medium and extra-long. Expect decent men with wounded hearts, women who are stronger than they think, and villains you’ll want to smack or worse. and all with a leavening of humour.