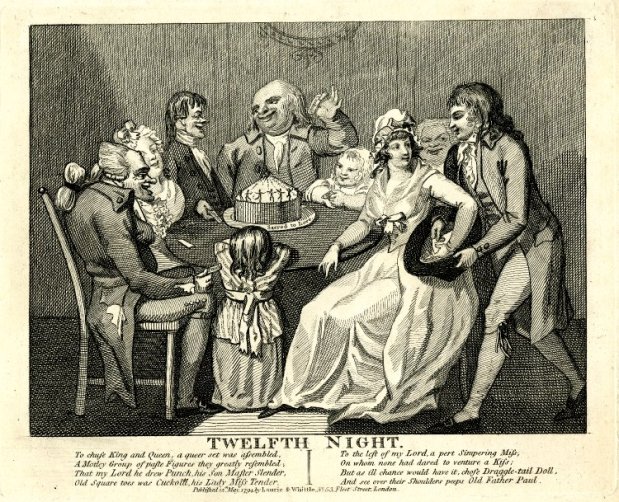 I hope everyone had a Happy Twelfth Night!

It’s a holiday that goes largely unnoticed in the United States, so in case you missed it, consider reading up on it and possibly practicing it a few days late. That way, you’ll be ready for it next year! And you won’t fall into the wassail bowl like this week’s word.

Drunk. Example: The rolling kiddeys hud a spree, and got bloody lushey ~ the dashing lads went on a party of pleasure, and got very drunk.

First came the ancient Roman holiday Saturnalia, the December celebration of the god Saturn, and making of all things debauched and merry. As little gods were gradually swapped out for one single God, the old customs centered around the winter solstice morphed into traditions and customs of a Christian nature, that of the birth of the single Savior. The ‘Birthday of the Unconquered Sun‘ became the Birthday of Christ by the Medieval era.

Twelfth Night festivities resulted in response to the 40 days of Advent the preceded Christmas. And what better way is there to break a fast than with tons of food, drink, and a bit of frivolous mayhem? The Advent fast would break on Christmas day; partying continued for twelve days and ended with a Twelfth Night feast the evening before January 6th, also known as Ephiphany.

True devotees of Twelfth Night fun would appoint a Lord of Misrule. It was his job to organize all the feasting and fun. Selection of the Lord was also part of the entertainment and entirely up to chance: a bean was baked inside a cake. Receive the slice with the bean and be crowned Lord of Misrule, you lucky devil. The Tudors even included a pea in their cakes, to be crowned Queen of the Pea. I’m not sure of her honors beyond that dubious title.

By the Regency era, beans and peas were replaced by silver trinkets and charms, and Twelfth Night traditions became purely secular in practice. The Victorians gilded the lily by wrapping their cakes in crowns.

I knew about the infamous Twelfth Night Cake, but not so much about the drinking. It’s time for recipes! And for authenticity’s sake, they’re metric!

Forget whatever Harry Potter drank. This here be Tudor buttered beere. The kind that puts hair on your codpiece. (That sounded better in my head.)

Tudor Butterbeer Recipe
(‘Beer’ means what today in the UK is called a ‘real ale.’ It is not a lager, or German-styled beer.)

Authentic Recipe Method:
Pour the ale into a saucepan carefully (without exciting it too much) and stir in the ground ginger, cloves and nutmeg. Gently heat this mixture to the boil, then turn down the heat and simmer on a low heat – the frothy ale will now clear. If this butterbeer is for adults then only simmer it for a few minutes on a low heat; for any younger adults, heat the ale like this for 20 minutes at 140C, (use a cook’s or jam thermometer). This will burn off almost all of the alcohol.

Whisk the egg yolks and sugar in a bowl until light and creamy. You may need to make this drink for the first time and then decide on how sweet you like it (if it comes out too sweet for you, make it again using less sugar next time). However the amount of sugar stated is from the authentic recipe, (if later blending with milk, then it is the perfect amount).

Once the spiced ale is simmering, remove the pan from the heat and add the egg yolk and sugar mixture, stir constantly, and return to a low heat, (you must stir constantly) until the liquid starts to thicken slightly. Be careful not to let the saucepan get too hot again or the egg yolks will scramble and the sugar will burn on the bottom before dissolving. Simmer at this low temperature for 3 minutes.

After 3 minutes, remove the pan from the heat and stir in the diced butter until it melts. Then froth the Butterbeer mixture with a hand-whisk until it looks like frothy, milky tea – you can also follow the Tudor advice and pour the Butterbeer from serving jug to serving jug to froth it up (like Mr. Carson would pour wine from decanter to decanter to aerate it and let it breathe). Allow to cool to a warm, drinkable temperature, pour into small glasses or small tankards, and serve immediately.

This is not hot, mulled cider. Let’s just get that misconception tossed in the rubbish bin straight out. It is hot, and it is mulled, but it’s closer to beer than any cider you’ve ever had. To be fair, we’re talking Medieval recipes here. Apples were involved, although more as a garnish. Slices of bread even factor into the ingredient list; original wassail had toast in the bottom of the pot, with hot wassail poured over.

Perhaps the association of wassail and apples came from the tradition of wassailing the apple trees, that of pouring leftover wassail around the roots of apple trees to ensure a good harvest the following year.

Preheat the oven 120C. Prepare the apples in advance and time it so that they are ready about half an hour before you want to put them into the Lambswool to serve. Core the 6 apples fully, getting rid of the pips. Lightly grease a baking tray, then place the apples on the baking tray about 6cm apart (they will swell up a little). Bake the apples for about an hour or so.

Now, while those are baking, grate yourself some nutmeg. In a large, thick-bottomed saucepan (they make the rockin’ world go ’round – still with me? Yes, it’s late and I should be in bed, and yes, I’ve taken my bronchitis cough syrup already.) with high sides, add the sugar. Cover the sugar in a small amount of the ale and heat gently. Stir continuously until the sugar has dissolved, then add in the ground ginger and the nutmeg. Stir, and keeping the pan on a gentle simmer, slowly add in all the rest of the ale. Leave for 10 minutes on a gentle heat as you deal with the apples.

Take the baked apples out of the oven to cool slightly for 10 minutes. Break open the apples and scoop out the baked flesh into a bowl, discarding the skin. Either mash them with a fork or purée them in a food processor until smooth, but not liquid. Think thick, dry applesauce. Add the apple purée into the ale – which is now called Lambswool – mixing it in with a whisk.

Let the saucepan continue to warm everything through for thirty minutes, on a very gentle heat, until ready to drink. When warmed through, use the whisk again for a couple of minutes (or use a stick blender) to briskly and vigorously froth the drink up and mix everything together. The apple and light froth will float to the surface, and depending on how much you have whisked it, the more it looks like lamb’s wool.

Ladle the hot Lambswool into heat-proof mugs or glasses, and grate over some nutmeg (to taste, because a little goes a long way). Or, pour the drink into a communal bowl (with several thick pieces of toast in the bottom if you want to be completely authentic) to pass around if you happen to be wassailing the local apple orchard. 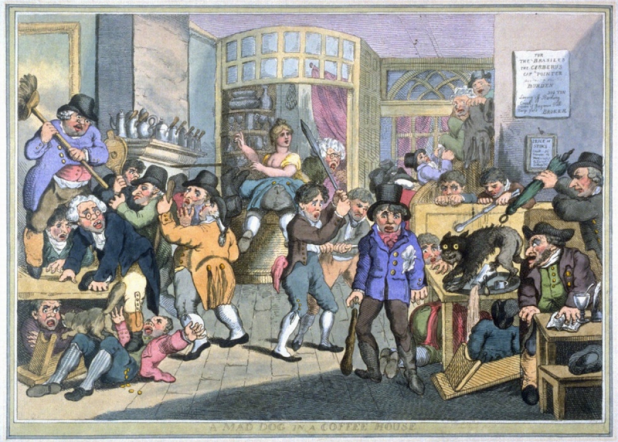 It’s Thanksgiving week in the United States. I talked a little bit about my historical ties to Thanksgiving in a previous year’s post, specifically my two relatives on board the Mayflower, one of whom happened to be John Howland, the man who fell overboard. When you’re clutzy in my family, you’ve pulled a Howland. We’re that kind of people.

Anyway, this year I thought to address the funnier side of the holiday, and really anytime family and friends gather together – that one relative who gets drunk.

In my family, we have an uncle who can be counted on to be “happier” by the time all the relatives gather together to break bread. Honestly, he’s a thousand times more entertaining and interesting than the usual exchange of gossip, comparison of family achievements, and inevitable jealousy over who cooked what better. I always put my seat next to this dear man, who can be counted on to keep up fascinating conversation and hilarious football commentary once the Cowboys game begins. He’s a harmless, erudite tippler. It also doesn’t hurt that he always declares me his favorite niece.

Most of the time at any social gathering, it’s one of the guests who imbibes too much. When it’s the host, well, there’s a vulgar slang term for that. And lovely historical illustrations that fit the theme in looks, if not titles.

Inconveniences of a Crowded Drawing Room by George Cruikshank, 6 May 1818, public domain.

Where the entertainer gets drunk before his guest.

Monstrous Craws at a New Coalition Feast by James Gillray, 29 May 1787, Library of Congress Prints and Photographs Division.

But once the event is over, and the devilry and revelry are past, there’s the devil to pay…