We’ve seen fresh-faced, country girl Moll Hackabout arrive in London, hit the harlotry jackpot and become a mistress, only to fall a few rungs into prostitution. This week, with Plate 4, she has fallen further and is now in jail (or gaol, if you prefer).

It’s amazing the amount of sympathy I feel for Moll, as compared to Tom Rakewell from A Rake’s Progress. For me, I feel that Moll came to London innocently enough, hoping for the best, although I wonder if she was warned on the coach along the way, that little good turned out for girls on their own in Town. In contrast, Tom Rakewell earns my ire, having been given every advantage only to squander them, despite having several chances to repent and escape his ultimate fate. Moll finally looks defeated in this plate, too, which somehow makes it worse.

A Harlot’s Progress was a series of six paintings and engravings. The paintings were destroyed in a fire at Fonthill House in 1755, but the original engraving plates survived, and are in the public domain.

A jail bird, a person used to be kept in a cage. Prisoners.

Moll is in Bridewell Prison. She beats hemp for hangman’s nooses, while the jailer threatens her and points to the task. Fielding would write that Thwackum, one of Tom Jones’s sadistic tutors, looked precisely like the jailer. The jailer’s wife steals clothes from Moll, winking at theft. The prisoners go from left to right in order of decreasing wealth. Moll is standing next to a gentleman, a card-sharp whose extra playing card has fallen out, and who has brought his dog with him. The inmates are in no way being reformed, despite the ironic engraving on the left above the occupied stocks, reading “Better to Work/ than Stand thus.” The person suffering in the stocks apparently refused to work.

Moll, the Jailer, and His Wife, from A Harlot’s Progress – Plate 4 – Moll Beats Hemp in Bridewell Prison, by William Hogarth, 1732, British Museum.

Next is a woman, a child who may suffer from Down syndrome (belonging to the sharper, probably), and finally a pregnant African woman who presumably “pleaded her belly” when brought to trial, as pregnant women could not be executed or transported. A prison graffito shows John Gonson hanging from the gallows. Moll’s servant smiles as Moll’s clothes are stolen, and the servant appears to be wearing Moll’s shoes.

The final painting of A Rake’s Progress – Plate 8 – In the Madhouse, is the sad ending to William Hogarth’s storyboard of art work. Tom is now of unsound mind, financially destitute, and a spectacle for both medical professionals and the bored elite.

While Bethlem Royal Hospital today is a state-of-the-art medical establishment for the treatment of psychiatric conditions, its history is much more sordid. Tom Rakewell would have dealt with the Monro family, who controlled the hospital for a total of 125 years, beginning in 1728. Under their watch, Bedlam, as the hospital came to be known, was a place where patient treatment consisted of frequent beatings, malnourishment to starvation, and ice baths to induce a return to sanity. When funds ran low for these so-called curatives ran low, the hospital opened its doors to family visitation; they generally declined to come. Instead, the scheme drew wealthy women touring what amounted to cruel entertainment in the form of everything from chained patients experiencing their “treatments,” to ill and abused patients wandering the halls and grounds.

Insane, crazy. Touched in the head. 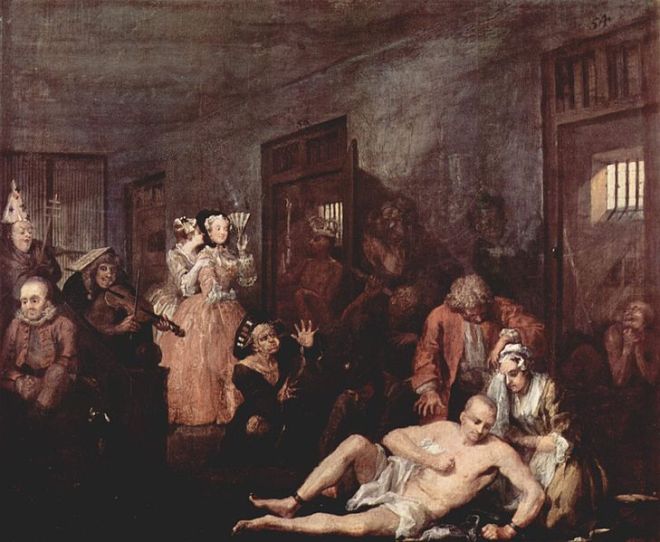 Finally insane and violent, in the eighth painting he ends his days in Bethlem Hospital (Bedlam), London’s infamous mental asylum. Only Sarah Young is there to comfort him, but Rakewell continues to ignore her. While some of the details in these pictures may appear disturbing to 21st-century eyes, they were commonplace in Hogarth’s day. For example, the fashionably dressed women in this last painting have come to the asylum as a social occasion, to be entertained by the bizarre antics of the inmates.