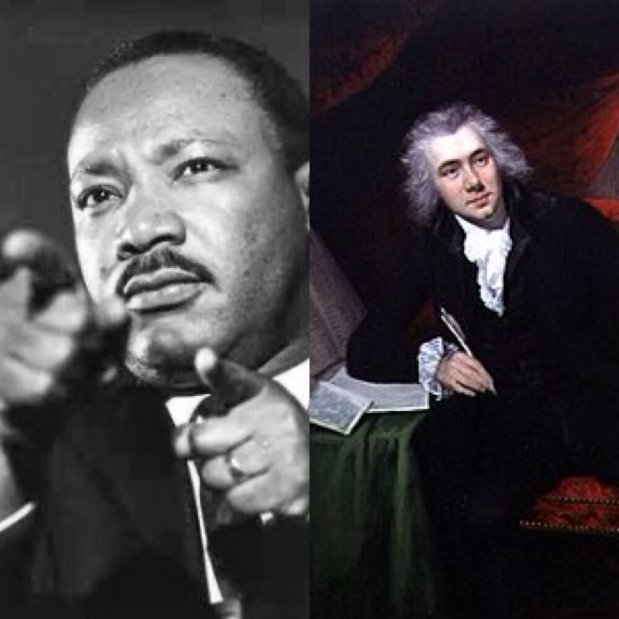 Case in point: today is Martin Luther King, Jr Day in the United States. No one should have ever needed telling the color of one’s skin mattered in determining anything about one’s worth. And yet here we are, in 2022, still having this discussion.

It makes me ill.

Like my Word of the Week implies, some people might benefit from oak stick education rather than parliamentary procedure.

Argumentum bacculinum, in which an oaken stick is a better plea than an act of parliament.

In opening, concerning the nature of the slave trade, I need only observe that it is found by experience to be just such as every man who uses his reason would infallibly conclude it to be. For my own part, so clearly am I convinced of the mischiefs inseparable from it, that I should hardly want any further evidence than my own mind would furnish, by the most simple deductions.

When we consider the vastness of the continent of Africa; when we reflect how all other countries have for some centuries past been advancing in happiness and civilization; when we think how in this same period all improvement in Africa has been defeated by her intercourse with Britain; when we reflect that it is we ourselves that have degraded them to that wretched brutishness and barbarity which we now plead as the justification of our guilt; how the slave trade has enslaved their minds, blackened their character, and sunk them so low in the scale of animal beings that some think the apes are of a higher class, and fancy the orang-outang has given them the go-by. What a mortification must we feel at having so long neglected to think of our guilt, or attempt any reparation! It seems, indeed, as if we had determined to forbear from all interference until the measure of our folly and wickedness was so full and complete; until the impolicy which eventually belongs to vice was become so plain and glaring that not an individual in the country should refuse to join in the abolition; it seems as if we had waited until the persons most interested should be tired out with the folly and nefariousness of the trade, and should unite in petitioning against it.

Let us then make such amends as we can for the mischiefs we have done to the unhappy continent… It will appear from everything which I have said, that it is not regulation, it is not mere palliatives, that can cure this enormous evil. Total abolition is the only possible cure for it.

I’d like to use a subject from which to speak this afternoon, the Other America. And I use this subject because there are literally two Americas. One America is beautiful for situation. And, in a sense, this America is overflowing with the milk of prosperity and the honey of opportunity. This America is the habitat of millions of people who have food and material necessities for their bodies; and culture and education for their minds; and freedom and human dignity for their spirits. In this America, millions of people experience every day the opportunity of having life, liberty, and the pursuit of happiness in all of their dimensions. And in this America millions of young people grow up in the sunlight of opportunity.

But tragically and unfortunately, there is another America. This other America has a daily ugliness about it that constantly transforms the ebulliency of hope into the fatigue of despair. In this America millions of work-starved men walk the streets daily in search for jobs that do not exist. In this America millions of people find themselves living in rat-infested, vermin-filled slums. In this America people are poor by the millions. They find themselves perishing on a lonely island of poverty in the midst of a vast ocean of material prosperity.

In a sense this was a struggle for decency; we could not go to a lunch counter in so many instances and get a hamburger or a cup of coffee. We could not make use of public accommodations. Public transportation was segregated, and often we had to sit in the back and within transportation — transportation within cities — we often had to stand over empty seats because sections were reserved for whites only. We did not have the right to vote in so many areas of the South. And the struggle was to deal with these problems.

And certainly they were difficult problems, they were humiliating conditions. By the thousands we protested these conditions. We made it clear that it was ultimately more honorable to accept jail cell experiences than to accept segregation and humiliation. By the thousands students and adults decided to sit in at segregated lunch counters to protest conditions there. When they were sitting at those lunch counters they were in reality standing up for the best in the American dream and seeking to take the whole nation back to those great wells of democracy which were dug deep by the Founding Fathers in the formulation of the Constitution and the Declaration of Independence.

Many things were gained as a result of these years of struggle. In 1964 the Civil Rights Bill came into being after the Birmingham movement which did a great deal to subpoena the conscience of a large segment of the nation to appear before the judgment seat of morality on the whole question of Civil Rights. After the Selma movement in 1965 we were able to get a Voting Rights Bill. And all of these things represented strides.

Now the other thing that we’ve gotta come to see now that many of us didn’t see too well during the last ten years — that is that racism is still alive in American society. And much more wide-spread than we realized. And we must see racism for what it is. It is a myth of the superior and the inferior race. It is the false and tragic notion that one particular group, one particular race is responsible for all of the progress, all of the insights in the total flow of history. And the theory that another group or another race is totally depraved, innately impure, and innately inferior.

To use a philosophical analogy here, racism is not based on some empirical generalization; it is based rather on an ontological affirmation. It is not the assertion that certain people are behind culturally or otherwise because of environmental conditions. It is the affirmation that the very being of a people is inferior. And this is the great tragedy of it.

Abused and scorned though we may be, our destiny is tied up in the destiny of America. Before the pilgrim fathers landed at Plymouth we were here. Before Jefferson etched across the pages of history the majestic words of the Declaration of Independence, we were here. Before the beautiful words of the Star Spangled Banner were written, we were here. For more than two centuries, our forebearers labored here without wages. They made cotton king. They built the homes of their masters in the midst of the most humiliating and oppressive conditions. And yet out of a bottomless vitality, they continued to grow and develop.

With this faith, we will be able to transform the jangling discourse of our nation into a beautiful symphony of brotherhood. With this faith, we will be able to speed up the day when all of God’s children, black men and white men, Jews and Gentiles, Protestants and Catholics, will be able to join hands and live together as brothers and sisters, all over this great nation. That will be a great day, that will be a great tomorrow. In the words of the Scripture, to speak symbolically, that will be the day when the morning stars will sing together and the sons of God will shout for joy.