I’m honored to have best-selling author Donna Hatch visit today. She has a new novella debuting April 18th, but we get a sneak peek here … and it’s available for preorder! 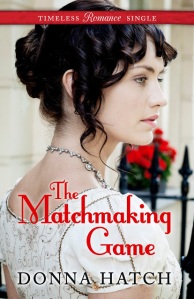 Rowena’s childhood friend, Evan, has returned home from war a handsome, but mysterious stranger. In an effort to bring happiness to her father, not to mention uncover the Evan she remembers from their youth, Rowena seeks to unite their parents. Who better to match a lonely widow and widower together than their adoring children? Her matchmaking game could help their parents find happiness and draw out her childhood friend buried beneath Evan’s new reserve … or it could break more than one heart.

With a gesture at a basket tied to the saddle, she said, “I had Cook pack plenty of those seedcakes Nurse Murray likes so well, as well as lemon tarts for you.” She made a face. “I’ll be sure to grab one before you devour them all and leave me with nothing but crumbs.”

He laughed softly. “Would I do that?”

Her impish grin filled him with sunshine. “It was your habit.”

With a flippant shrug, he teased, “It was for your own good. I didn’t want you to get too fat.”

She made a gesture to her waistline. “Do I look like I need someone to monitor my eating habits?”

He made a perusal of her, letting his gaze travel from her face downward, slowly, but forgot he was supposed to be teasing her. Instead, he took a really good look. Fourteen-year-old Rowena had been as curvy as a blade of grass. Twenty-three-year old Rowena, with her figure accentuated by her fitted riding habit—so much more flattering than the normal, high-waisted gowns of the day’s fashions—had the graceful, generous curves of a Greek statue of Aphrodite. A new tightness formed inside his chest.

Rowena looked at him as if she’d never seen him before. Surprise, and something almost smug, deepened the gray of her eyes. She put a hand on a hip. “Like what you see, Captain?”

He tugged at a suddenly strangling cravat and cleared his throat. “Forgive me. You’ve changed.”

“How kind of you to notice,” she said dryly. “Give your major a leg up?”

With a smile at her reference to the honorary rank he’d given her, Evan dismounted. He laced his fingers together so she could mount her horse. A pert smile came his way before she placed her left foot in his cupped hands. She put one hand on his shoulder to steady herself as he boosted her up. Her soft body brushed his arm and chest. Her scent, something soft and feminine he could not name, tingled his senses. Mere inches away, her smooth cheek and moist lips taunted him. His chest squeezed, and his knees wobbled. Awareness of her, of the desirable woman she had become, rendered him immobile. She glanced at him, one brow raised, and a half smile curving those luscious lips. A burning energy formed in the middle of his stomach and shot outward like sunbursts.

She parted those lips and spoke. “Am I too heavy for a big, strong man like you?”

“Er, no. Of course not.” He cleared his throat again and boosted her up with a bit too much force.

Despite his aggressive boost, she placed her right leg over the leg rest of the sidesaddle and found her balance. She settled the long, heavy skirts of her riding habit around her, while he helped position her left foot in the stirrup.

With the reins in one hand and her riding crop in the other, she eyed him with an expectant lift to her brows. “Shall we?”

He shook his head, stopped staring, and mounted Otoño. It must be all Winnie’s talk about courting Rowena that had him so rattled. He couldn’t entertain such an idea. He’d made a vow to Joseph and all but promised himself to Cynthia. Besides, as an additional benefit, Cynthia’s dowry could restore the family fortune without having to sell off some of its most precious assets and break up generations of holdings. His path was already paved. Honor and duty dictated his next move.

Donna Hatch, author of the best-selling “Rogue Hearts Series,” is a hopeless romantic and adventurer at heart, the force that drove her to write and publish seventeen historical romance titles, to date. She is a multi-award winner, a sought-after workshop presenter, and juggles multiple volunteer positions as well as her six children. Also a music lover, she sings and plays the harp, and she loves to ballroom dance. Donna and her family recently transplanted from her native Arizona to the Pacific Northwest where she and her husband of over twenty years are living proof that there really is a happily ever after.

Click HERE to receive the first novel in her Rogue Hearts series for free.

Connect with Donna on social media:

And don’t forget to always #ReadARegency!

2 thoughts on “Keep Calm and Read This! ~The Matchmaking Game by Donna Hatch~”