It is a truth universally acknowledged that a Janeite in possession of a free afternoon must be in want of an Austen adaptation. 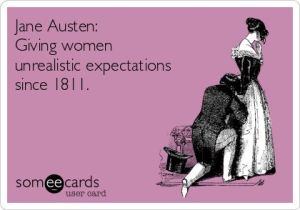 My least favorite Austen story is Mansfield Park. I’m just lukewarm to Fanny and Edmund. After an entire novel’s worth of watching and wishing by Fanny, and chummy brotherliness by Edmund, their ending seems less happily ever after as just – well – ever after. The argument could be made that two such meh people are perfect for each other, and that love doesn’t always have to be passionate or tempestuous, but….pfft. I’ve always wished instead for Henry and Fanny to be transformed by love for each other. I wanted his liveliness to balance out her solemnity. I wanted her maturity to bring out responsibility in him. Together, he’d no longer be mercurial and she’d throw off the garb of milquetoast.

Sure, the story features Mary Crawford, Maria Betram Rushworth, and Aunt Norris – the original mean girls trifecta – blissfully selfish and possessed of doctorates in passive aggression. But secondary characters can’t carry or redeem an otherwise staid novel. I like them for the spice they add to the story, but I really only hope they get what they deserve. I have more sympathy and interest in the futures of Rushworth and Tom Bertram than I honestly do in Fanny and Edmund.

When YouTube suggested I might like a little webseries based on my sixth favorite Austen novel, I was in between television addictions (post Outlander, pre-Downton Abbey), and vulnerably bored. By the third “webisode,” I was pleasantly diverted. By the tenth, I was subscribed. I know it’s neither TV nor HBO, but it’s good. Really good.

From Mansfield With Love, adapted and performed by the  Foot in the Door Theatre, is faithful to the original, earnest in its depictions, and utterly captivating. It’s the little adaptation that could. Mansfield Park still belongs to the family Bertram, but is here a country hotel. The Crawfords are Town designers who have come to refurbish the old relic, and Fanny – renamed Frankie – is in housekeeping. She vlogs to her Royal Navy brother Will, tangentially documenting the goings-on in everyone’s lives.

The actors and writers of From Mansfield With Love have managed to make me sympathize with and adore Fanny/Frankie. They’ve also made me do what the book could not: completely ship Franny/Frankie and Henry, then loathe the thought of them together after the big betrayal. Ed Bertram, the congenial lifelong friend and new school teacher, could still do with a kick or two in his posterior. This portrayal, however, fully illustrates how Ed was comfortably complacent until something new shook him up, how his eyes were ultimately opened to what he had when the new spoiled, and how he could lose what he never knew he needed most. When the climax arrives and we see the true Mary, we finally see the true Edmund, thank the good Lord.

The series began nine months ago with an engaging introductory episode. This week is episode 83 and Franny/Frankie is “Running on Empty” now that Henry’s done something again, Tom has been in a horrible accident, and Ed and Mary are having a tiff.  Big things are afoot! Might I suggest it’s a terrific time to binge-watch and catch up for what will undoubtedly be a big ol’ slice of satisfying ending?

PS – The troupe actually made a mini-movie of Lovers’ Vows. You really should watch the lead-up episodes for the squabbling, scheming, lusting, and Tom Bertram tantrums, but if you’ve always wanted to see a black-and-white, art nouveau version of the play, here you go: